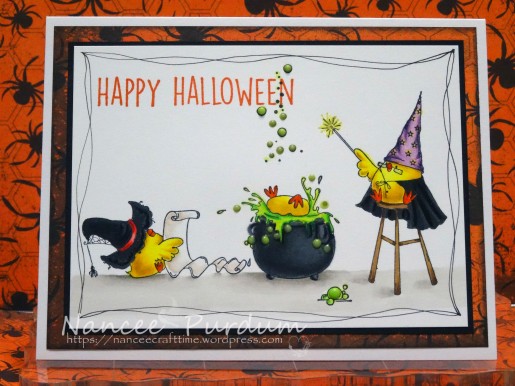 The Wizard, the Witch, and The Cauldron, now what better image is there for a Halloween card????  With ten great nieces and nephews, and one grandson I have been pretty busy lately making my Halloween cards.  I just love these chicks from Stamping Bella.  They have so many for so many different occasions.  I just love making cards with the cute little guys (or gals?)

My last two cards were colored using colored pencils, so I thought I would switch back to my Copics for a couple of cards.  I’ve listed the colors I used at the bottom of my post.

After coloring the images, I debated on whether or not to use the dies to cut them out, but decided that I liked them better as they were.  After all, I had to mail them, and this way they were a little flatter for the mail man.  I needed something else but couldn’t decide if I wanted to use a larger die cut to cut a larger shape or not.  I had seen some cards where different crafters had just simply used a Copic (or some other fine line pen) and drawn some lines around the outside of the image.  I decided to give it a try.  I liked it.  I found that instead of trying to draw one line at a time, it worked better to draw one continuous line around the outside of the card and then continue a second time around.  This eliminated some the the extra “dots” at the corners.  I will probably be doing this again on some cards in the future.

I had colored all of the bubbles with my Copics, but since I had some green Nuvo Crystal drops, I decided to try some of them on my card.  I liked the way they made the bubbles pop!  I added some Glossy Accents to the glasses of the wizard.  It kind of gives them a little glimmer. 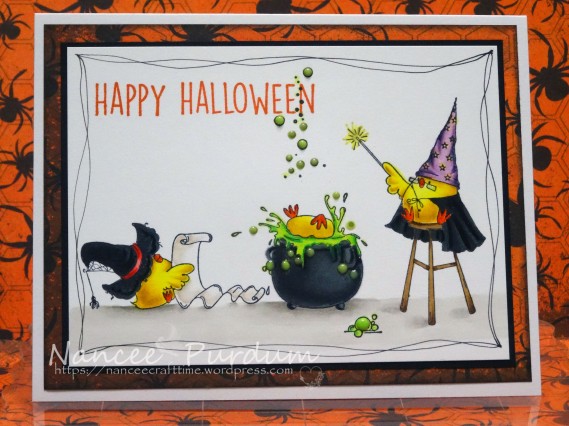 A simple black mat and some patterned paper behind my image and my card was done.

Thanks for stopping by!  One more Halloween card on Monday and then I need to start my Thanksgiving Day cards!  Oh my!  No rest for the crafters!

Follow A Little Crafting Time on WordPress.com
Join 238 other followers